Piazza Garibaldi arose in 1809, when the old Church of Santa Giustina was demolished following the Napoleonic suppression of religious orders. The Church was one of the oldest in the city and some documents show that it already existed in 1195. If you look down at the pavement you can see the trace of the building shape outlined on the Istrian stone Listòn.
Due to its small size, the square was the place of departure of the “Race of the Berbers”, in vogue between the XVIII and XIX centuries, a popular spectacle that also involved the nobles and local gentlemen. After the demolition of the church, the square became the home of the vegetable market and then, after the transformation of Palazzo Pretorio into the seat of the Chamber of Commerce in 1851, the grain market was transferred to the square.
In 1896 the bronze monument by the artist Ettore Ferrari dedicated to the hero of two worlds Giuseppe Garibaldi was inaugurated.
The square is striking due to the presence of palazzi and buildings that follow one another in a succession of styles and eras. From Borsa Café the view extends from the old Palazzo Pretorio , with its Art Deco elements; Palazzo Ravenna, now home to the Reclamation Consortium, to the neoclassical town Theatre dated 1819 ending, on the opposite side, with Palazzo Nagliati, today a space of the Accademia dei Concordi for young people.

In June 1882, after the death of the hero of two worlds, Rovigo wanted to pay homage to him by commissioning an equestrian statue dedicated to him. The same year a tragic flood of the Adige devastated the city so the statue was commissioned a few years later, Ettore Ferrari was able to create it only in 1896. Ferrari asked that he be paid only living expenses for the work of the bronze monument, so he was awarded honorary citizenship. A curious anecdote, the accuracy of which is doubtful, the monument was meant for the city of Rome but was brought to Rovigo as the artist, notoriously known as a Republican, had placed two crowns under the brackets, in contempt of the Savoy monarchy.

On the northern side of Piazza Garibaldi, at the intersection with Via Bedendo, you can see the ancient palazzo pretorio built in the late 1400s as the residence of the Venetian Podesta together with the administrative and judicial offices of the government of Polesine. The building underwent, over the course of the next century, numerous modifications and extensions so that in the 1600s it had a large door that opened onto an ample courtyard. Inside, next to the private rooms, the Podesta’s study, the council room, there was also a prison for torture equipped with a pulley to string up prisoners to be interrogated.
With the fall of the Venetian Republic, the palace lost prestige and with the Austrian domination it became the Royal Imperial Court with adjoining prison preserved until 1857.
The establishment of the Chamber of Commerce, which took place around the mid 1800s, the restructuring of the ground floor with a rearrangement of the space was undertaken: the hall became the Exchange, a cafe was opened called Cafe Borsa, still here today and spaces for merchants to trade. On the premises rooms were reserved for the Office of Post and Telegraph which remained there until 1931. The “Salone del Grano”, “Grain Trade Hall”, was created in 1929 in the main building, with a large glass barrel vault, made of glass panels supported by a wooden and iron structure and the coats of arms of the Province and of the Chamber of Commerce are in the centre of the the mosaic floor. 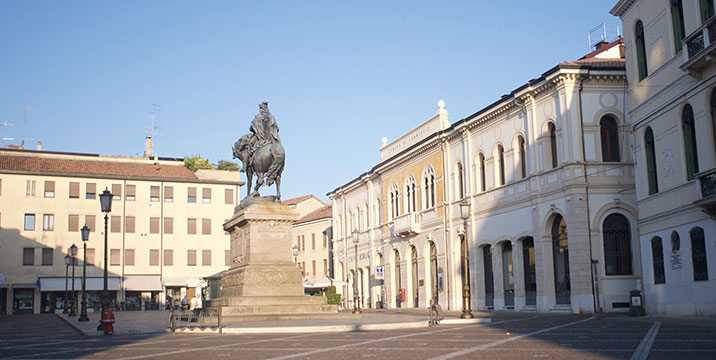 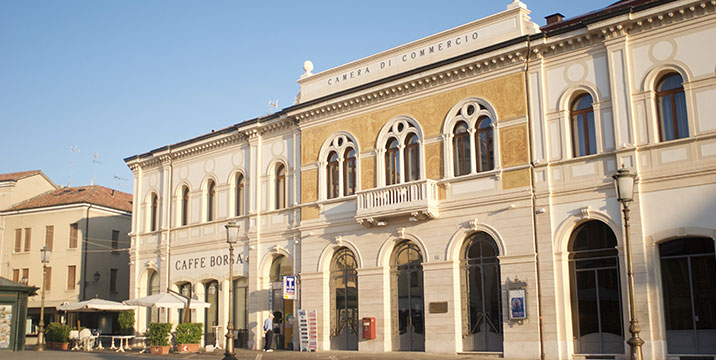 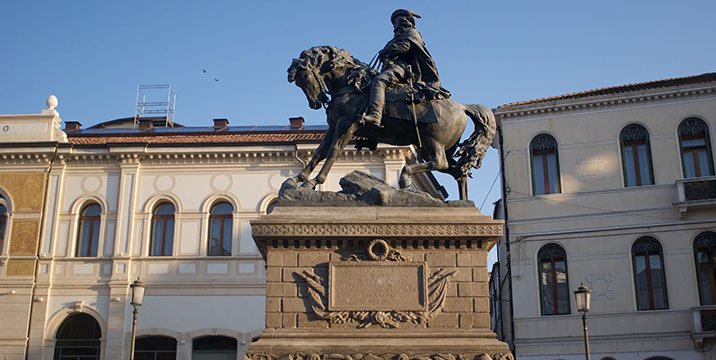