If you place yourself in front of the city tower and turn to the right, you can see the Palazzo of the Accademia dei Concordi. Established in 1580 by Count Gaspare Campo, the Accademia established itself as the most authoritative cultural institution of the time. The chosen name, “Concordi”, stressed the tension in the search for harmony and convergence of ideas and its components. At the end of the XVIII century the accademia building was planned based on a design by the architect Sante Baseggio from Rovigo, characterised by a sober elegant style. From the first half of the XIX century the collaboration with the Town Hall has led to the opening of the Library and the Art Gallery.
In the coat of arms, designed by Giambattista Piazzetta and engraved by Francesco Zucchi, is the inscription Mens omnibus una est, all are of one mind, to emphasize the collaborative spirit that inspires the prestigious institution.

The Accademia of Concordi, founded in the late 1500s as a cultural institution, began in the 1700s to be particularly active in the field of painting by establishing relationships with the major Venetian painters. A rich gallery of portraits by famous painters of the time, including Tiepolo, Piazzetta and Longhi, distinguishes the collection, enriched thanks to the passion of the local noble families who were eager to see their homes embellished with precious works. The desire for a pubblic gallery which dates back to 1833, is due to Count Giovanni Francesco Casilini, passionate collector of paintings. Later, in 1876, the art gallery was enriched with half of the rich collection of paintings of the Silvestri family, while the other half went to the episcopal Seminary. These works were gathered about a century later in the permanent collection of the Art Gallery which includes, among others, works by Giovanni Bellini, Palma il Vecchio and Rosalba Carrera. Having long been housed in rooms adjacent to the Accademia dei Concordi, the Accademia Gallery is now located in the splendid Palazzo Roverella. 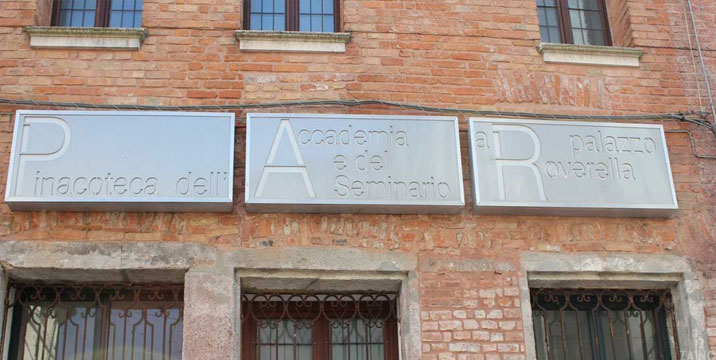